Parallel Worlds - Is Now the Time to Prepare for the Metaverse? 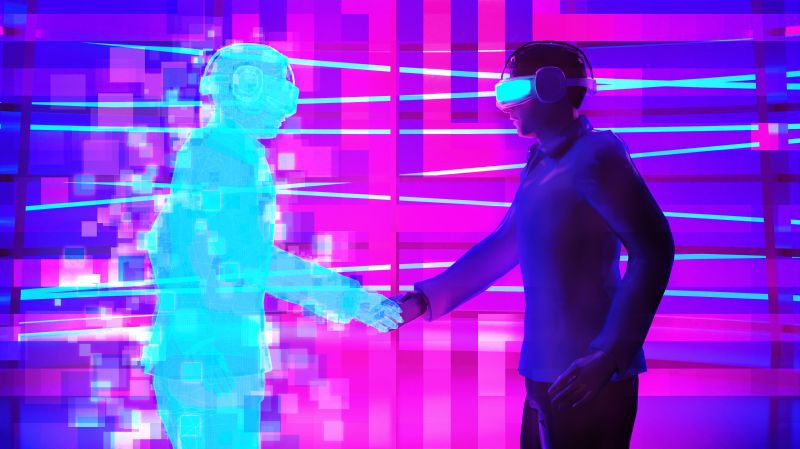 The arrival of Mark Zuckerberg's vision of a three-dimensional "metaverse" is set to change the way we socialise, work, and buy products and services online. Should brands be preparing for an internet that could look very different in five years time?

The mainstream metaverse may be with us sooner than you think. For instance, if you've grown weary of admiring colleagues' bookshelves and potted plants as you connect via Zoom, then Microsoft may have a treat of sorts in store for you. Beginning in 2022, the software giant plans to roll out a virtual collaborative workspace that can be populated by avatars. Meanwhile, in a more socially-inclined project, Facebook founder, Mark Zuckerberg has allocated billions of dollars to the development of an immersive digital space, where we can all meet and interact in virtual reality worlds. Zuckerberg's "metaverse" is expected to start gaining traction with users in five to ten years time. While the launch is certainly not imminent, the company is already posting video clips of what it will look like. Meanwhile, games such as Fortnite already include some metaverse elements.

The metaverse concept promises a digital environment of limitless possibility, but potentially at least it's not simply about escapism. A true metaverse should mirror the physical world and have its own economy. Alongside the people - as represented by avatars - there will be shops, businesses and new opportunities for brands to engage with consumers. But is it all hype?Well, even today,brands are experimenting - albeit in a limited way - with the creation of virtual worlds and experiences. For instance, in September of this year, BMW marked the launch of its own mini-metaverse - dubbed Joytopia - with a concert by Coldplay. Created in collaboration with metaverse company Journee, the platform allowed fans of the band to appear as avatars within a concert setting.

Fashion brands have also been embracing immersive digital spaces. For example, Dior - working in collaboration with British VR company Emperia - has created a create 3D space that can be explored by customers. These brand excursions into the world of VR fall some way short of the creation of a multi-faceted metaverse of the type Mark Zuckerberg is planning, but they do demonstrate the possibilities of three-dimensional experiences. As Emperia CEO, Olga Dogadkina explains, virtual reality allows brands to "extend their physical experiences into the digital realm,"building in a degree of interactivity in the process. And with Meta (the renamed Facebook) evangelizing the concept of the metaverse to anyone who will listen, Dogadkina says brands are sitting up and taking notice, albeit cautiously. "For most brands, this is a new practice," she says. "There is an appetite. But there is also an education process."

Thomas Johann Lorenz is CEO of Journee - the Metaverse Company. As he sees it, three-dimensional worlds provide a means to create the kind of emotional and experiential connection between brands and consumers that was previously only possible offline. "The internet has traditionally been all about transferring information," he says. But human connection is 80 per cent about emotion."The metaverse," he says, opens the door to a new kind of immersive storytelling.

The Covid Factor
The need to create online experiences has been accelerated by Covid. At least that's the view of David Ripert, CEO of augmented reality and 3d modelling agency, Poplar Studio, a company that has worked with brands such as Selfridges and Maybelline. "With shopping habits dramatically changing, it has never been more important to incorporate new digital technologies into the customer buying journey. Brands that don't want to fall behind are exploring new ways to engage with consumers and retain their attention," he says. To date, experiments in the nascent metaverse have centred around retail, luxury goods. the automotive industry and art but Lorenz says his company has been in talks with businesses from just about every sector.

Spending Time
All of which sounds good in theory, but in practice, does metaverse-style creative content perform better than more traditional marketing tools. "The average viewing time is outperforming all other channels," says Lorenz. "When compared to video, a website or a banner, viewing time is exponentially longer."

Ripert agrees. Citing his own company's specialism - AR - he says:"The average dwell time of an AR experience is 75 seconds, four times longer than average video engagement." And in Dogadkina's experience, a longer dwell time can also feed through to higher conversion rates. "If you keep someone for a longer period, you get more engagement," she says. "And when we add a buy now or shop now button, we get an 18% clickthrough rate."

Shopping doesn't have to be for physical goods or services. There is also scope to sell unique virtual products in the form of non-fungible tokens (NFTs). In fact, according to Henk Haaima, Creative Director of creative agency Havana Harbor, NFTs will play an essential role in the development of metaverse-driven commerce. "NFTs and the metaverse are on the same page," he says. "People will need to use tokens to protect their digital assets when they are sold online."

And looking beyond enhanced engagement with consumers and online sales, Haaimi sees a number of use cases for VR and AR spaces. "If you sell cars you can allow customers to configure vehicles," he says. "VR can provide spaces for meeting and training. I have worked on a lot of training material."

Omni Channel
In the current online environment, VR experiences seldom work in isolation. In the future, internet users may disappear for hours into the kind of metaverse that Mark Zuckerberg is envisaging, but as things stand, the average internet user is likely to be hopping between conventional websites, social media, video platforms and also physical stores. In that respect, VR is part of a multi-channel play. In the case of Emperia's collaboration with Dior, that manifests in online/offline strategy, with consumers having the opportunity to interact with the brand at the Harrods flagship store in London or online. In each case, the brand identity is retained but the experience itself is adapted for the channel.

Meanwhile, Ripert and Lorenz stress those who experience VR or AR are sharing what they've seen on other channels. Ripert says 61% of AR users share the ads they've seen on social media with their own audience. Meanwhile, Lorenz says BMW's Coldplay concert was widely shared across video platforms. "We had 45 million views on Tik Tok," he says. And while the interactivity is lost, the reach of the event went beyond the original VR experience.

But what of the future? As Lorenz rather ruefully points out, the launch of Journee coincided with Facebook changing its name to Meta. This was a mixed blessing. On the one hand, the Meta vision validates the concept of immersive 3D engagement. VR is an experiment for many brands, but it is also likely to become an increasingly important part of their wider marketing efforts. But simultaneously, companies that have built smaller scale platforms and creative for brands will - in time - have a very large competitor.Lorenz believes the brands will want to build their own experiences while also using Meta's platform. "At the moment, brands advertise on Facebook, but they also have their own websites and branded content," he says."That will continue."

As brands consider what their VR strategies can achieve, there are some important creative choices to be made, not least in terms of the nature of the experience. Meta envisages much greater use of VR headsets. This is something that only a minority of consumers - often gamers - have embraced. Haaima sees different levels of experience ranging from true VR - with the headset dropping consumers into fully-realised digital worlds -to an approximation of 3D environments navigated on flat screens via laptop, phone or tablet." It will be up to the consumers to decide what to do," he says.

Dogadkina stresses that the creative vision has to match the technology available to consumers. "It needs to work on any device," says Dogadkina. There are also technical challenges. Common standards for the metaverse have not yet been established and this can be a problem for developers. "You can design something and find that a few months later it is not working," says Haaima. But Haaima remains convinced that immersive VR will become central all our lives and thus a vital channel for marketers and advertisers. Citing paintings, he says: "People have always had a need to create second versions of the world. And that is what VR is all about."

Acknowledging the challenges, he says brands can begin to experiment by creating new or deploying existing 3D assets and using a range of available technologies to make them accessible to consumers in a VR context. There may be, as yet, no settled view of what the metaverse of the future will look like but now is a time to experiment.