The Same But Different -Should Europe's Brands Be Doing More Live Streaming? 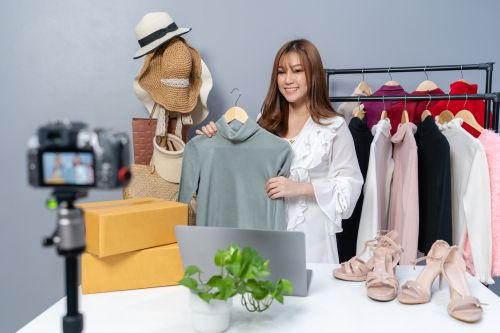 In the space of just five years, live streaming has emerged as a major driver of e-commerce sales in China. Now - lured by the prospect of a new source of revenue and some very direct customer engagement - marketers in Europe are beginning to test the potential of live content coupled with online purchase opportunities. But rather than simply following the Chinese example, brands are developing their own strategies.

Live stream commerce is a genuine phenomenon in China. The story began back in 2016 when internet behemoth, Alibaba launched Taobao Live. Essentially the platform combined live streaming with an e-commerce store, enabling influencers to demonstrate, endorse and sell products directly to the consumer. Since then, live streaming has caught the imagination of China's consumers. According to consultancy, McKinsey, around two-thirds of online shoppers have made purchases as a direct result of watching streamed content. In a country where more than 700 million people, make purchases online, the live stream has become the dominant e-commerce channel.

A key factor in its success has been the role of mega influencers. Stars such as Viya and Jiaqi Li - also known as the lipstick king - have their own regular shows. They are paid a fee plus commission and their job is to advocate products and drive sales. And they do it with breathtaking efficiency. Legend has it that Viya's show has racked up $500m in sales in a single 24 hour period.

So here's the question. Why hasn't this kind of live streaming gained more traction in Europe and the US? We have the influencers. We have - thanks in no small part to the pandemic - a rapidly growing e-commerce marketplace. And building a platform that combines streaming, interactivity and e-commerce isn't that difficult? So are marketers in the west missing a trick?

Owning the Customer
Well, maybe they're just approaching the opportunity in a slightly different way. Live streaming is slowly but surely establishing itself as part of the online marketing armoury. However, the approach taken doesn't necessarily adhere to the Chinese template. One key difference is that live streaming in China is controlled by a few key gatekeepers, including Alibaba, Baidu and JD.com. They provide the facilities, hire the influencers and also select the products that will be put into shows.

But that's not the only model. Maryam Ghahremani is CEO of Bambuser, a leading live commerce company with a client list that includes electronics giant, Samsung and beauty brand, Matas. As she sees it, the European market is more fragmented with a diversity of platforms offering brands a chance to mix streams and commerce.,,In China, you have one company that has about 80 or 90 per cent of the market," she says, referring to Alibaba's Taobao platform. ,,In the UK, there are a lot of platforms that are investing heavily. Ghahremani says the plethora of platforms gives European marketers more control over what they do. "The brands that we work with want to own what they are doing," she says. "The holy grail is data and our customers want to own the relationship."

Karoline Gross, CEO and founder of shoppable video platform Smartzer agrees. The company works with brands such as Dior and Adidas to help them combine e-commerce with video-on-demand and live streaming. ,,What we are seeing is that brands want to run live shopping on their own channels," she says. In other words, rather than marketing a product through a third-party channel, the preference is for shopping to be integrated with live streams accessed via the brands' own websites.

Fewer Influencers
There is - perhaps surprisingly - less emphasis on influencers. The stars of Youtube and Instagram can certainly play a role, but there are other options. ,,Some of our clients do use influencers," says Ghahremani. ,,But that's not always the case. A B2B company might use experts in the field to explain a product. For instance, a pharmacy might use a doctor." Equally, a company might use a founder or a member of staff who knows a product intimately to be the public face of a product or brand. ,,So you have to choose your host carefully," adds "Ghahremani. You have to decide whether it's more appropriate to have someone like Kim Kardashian or an expert."

Engaging the Audience
Really it's a question of selecting people who will really engage the audience. For instance, 67 Pall Mall is a London based wine club that until recently interacted with its members through the traditional means of offline wine tasting events. This route to customer engagement was effectively closed down by the pandemic, so the company reacted by creating its own TV channel -enabled by platform provider Red Bee Media - scheduling live and recorded programming. Members of the club are sent out packs of wine and they can take part in live, interactive tasting sessions, usually filmed at winemaking centres across Europe. There are also discreet buying opportunities.

CEO and founder Grant Ashton says the key to a successful broadcast is to have the right faces on screen. Generally, this means people from the industry with the kind of expert knowledge and enthusiasm that adds value to the viewer. ,,So, I want to have the winemaker or the general manager," he says.

The Marketing Challenge
Running a live stream from a brand's own site does build in a high degree of control but that goes hand-in-hand with a marketing challenge. In China, the big streaming services have created the market. Those channels are magnets for style-hungry consumers. European brands that use their sites must attract an audience. For well-established names that might not be difficult. Gross says Smartzer's clients advertise with banners on their own sites and use social media to alert customers to upcoming streams.
Is that enough to lure customers in sufficient numbers? Well, Grant Ashton says live-casting has its own appeal both for the audience and expert guests. As he sees it, asking someone to record content for a piece of video-on-demand content isn't a particularly exciting prospect. ,,But people find the idea of doing a live TV programme very exciting," he says. That excitement extends to the consumer. ,,People do get excited," says Gross. ,,There is a fear-of-missing-out effect."

All well and good, but do live streams generate sales? According to Gross, the answer is yes. Shoppable prerecorded video generates an average click-through rate of 10-15 per cent. With live video that average rises to 30-40 per cent and it can go as high as 70,'' she says. Meanwhile, Bambuser reports that Samsung's campaign secured a conversion rate 127 per cent above target when it used the Bambuser platform to launch Its Galaxy G Fold 2 5G handset. It's not just about clickthroughs and conversions. Live streams also build engagement and brands typically measure metrics such as likes, comments and purchases at a later date.

The market is evolving. In addition to enabling brands to create their own channels, Bambuser has launched a new service that combines shopping with streams on YouTube, Facebook and other social media outlets. Amazon is also partnering with brands on live streams. In China live streaming commerce tends to be focused on the beauty, fashion and food sectors, with the platform operators working (almost) as TV channels in their own right. Fashion and beauty are important in Europe but Gross and Ghahremani both see opportunities for SMEs and B2B companies to use the medium. ,,I really think this will play greater role in e-commerce," says Gross.